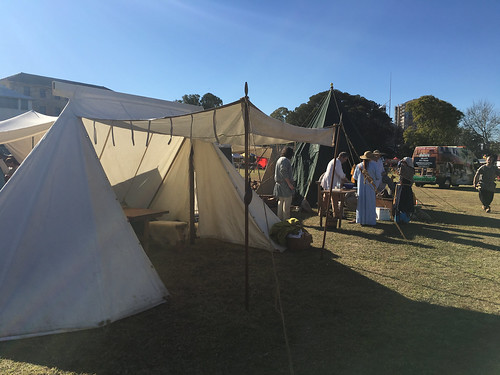 The Revolting Peasants were persuaded by nefarious means (ok, Andrew asked me and I said yes) to provide a Saturday night feast for the Winterfest reenactors. We were catering for 100 people. I did my usual thing, when it comes to cooking stuff, of reading lots of different recipes and using an idea from this one and some ingredients from that one and then making it up as I went along. Apparently everyone got fed, no-one died and some people wanted to know if they could have the recipes.

So that went well. And here’s, more or less, what we fed them.

Pork and Apples in Cider

Chuck everything except half the apples into an enormous pot or two, preferably ones with lids.
Pour in the cider, but only after all your kitchen hands have taste-tested it to make sure you bought the decent stuff (it was Magners).
Top up with water to just cover the meat and veg.
Give it a stir.
Sit your pot over or in an open fire and keep it simmering for most of the afternoon. (Give it a stir whenever a member of the public asks what it is.)
An hour or so before serving add the rest of the apples. 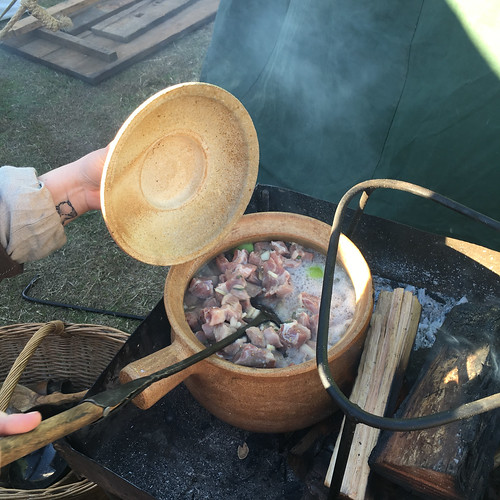 Beef and Currants in Red Wine

Put beef, onions, currants, pepper, salt, cinnamon and cloves into an enormous pot or two, preferably ones with lids.
Pour in the wine and vinegar.
Top up with water if needed to just cover the meat and veg.
Add the bay leaves, parsley and stock cubes.
Grind the saffron in a mortar then ladle some of the liquid from the cooking pot into the mortar, mix it up and pour back into the pot. You might need to do the rinsing with wine a few times to get all the saffron out of the mortar. And you won’t want to waste any, that stuff costs a fortune.
Give it a stir.
Sit your pot over or in an open fire and keep it simmering for most of the afternoon. (Give it a stir whenever a member of the public asks what it is.)
An hour or so before serving do some taste testing and add salt, pepper and/or honey as needed. 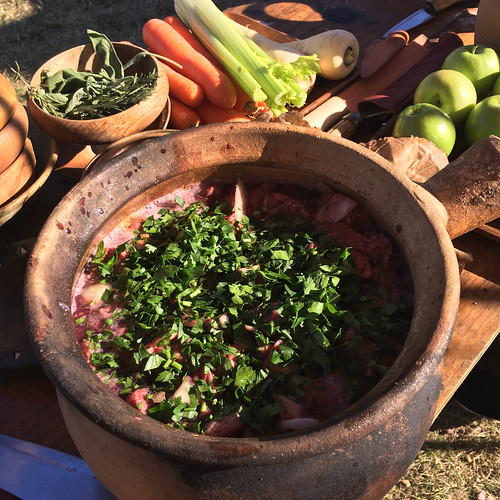 Get a pot big enough to fit all the pieces of corned beef into at once.
Add all the other ingredients and then top up with water to just cover the meat
Give it a stir.
Bring to the boil and then simmer for at least 2 hours.
Keep an eye on it and top up with water if necessary.

If you could be bothered you could fry the leeks in a bit of oil to start, but chucking everything in a pot at once works too.
Simmer until the root vegetables are tender.
Stir through parsley just before serving. 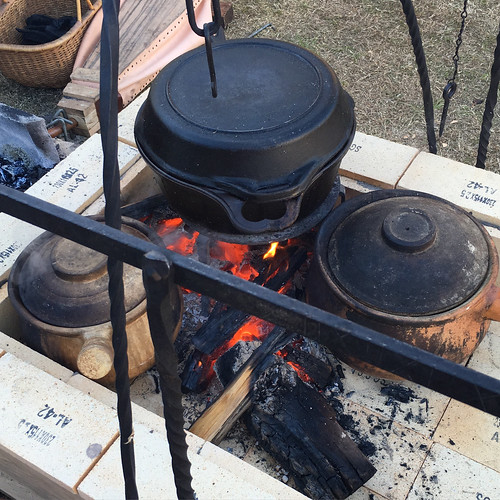 Place beets, rosemary and mint in a pot and cover with water.
Bring to the boil and cook until beets are tender.
Drain the water off retaining the beets and herb.
Add butter and more shredded mint if you can find it (I found it the next evening when unpacking at home).
Stir gently to melt the butter and coat the beets. 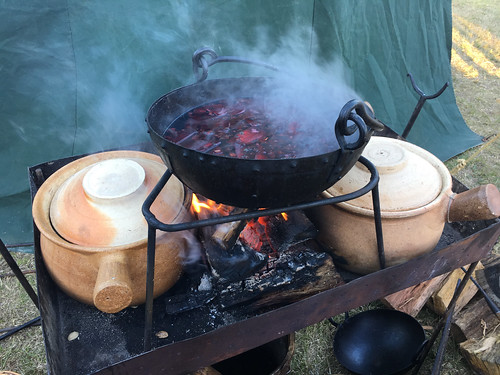 I have no idea how I managed to produce this over an open and entirely inadequate fire in the dark without measuring anything properly. But I did. I think it turned out ok. If you really wanted to know how to make white sauce then google is your friend.

Apples
Pears
Blueberries
Strawberries, hulled and cut in half or quarters depending on their size
Currants
Nutmeg
Cinnamon
Brown sugar

Quantities at this point are limited by the size of the only remaining pot (prayers of thanks are made to the gods of hoping for the best that there is a pot remaining at this point in the proceedings). 3 large punnets of strawberries and 2 punnets of blueberries went in first then equal numbers of pears and apples. Then we decided to add the rest of the currants left over from making the beef dish. Spices were sprinkled generously till it looked about right. Sugar added sparingly. Water was added to about 3/4 the depth of the fruit. Then over the fire it went to simmer, and be stirred occasionally, for about an hour.

I did not attempt to cook custard over an open fire, that came in plastic bottles. 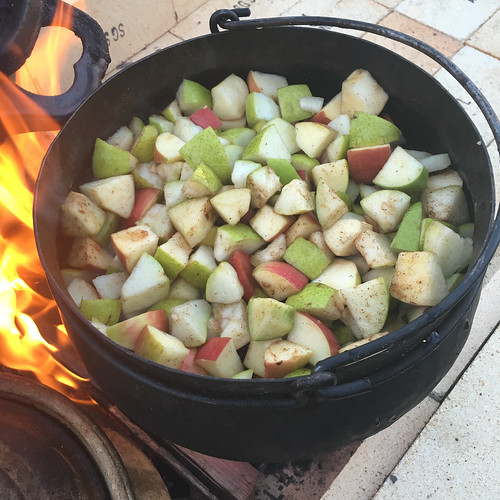 While all of that was going on Yolanda roasted quail for our lunch and Adam baked bread in the cob oven. Apparently for peasants it’s all about the food. 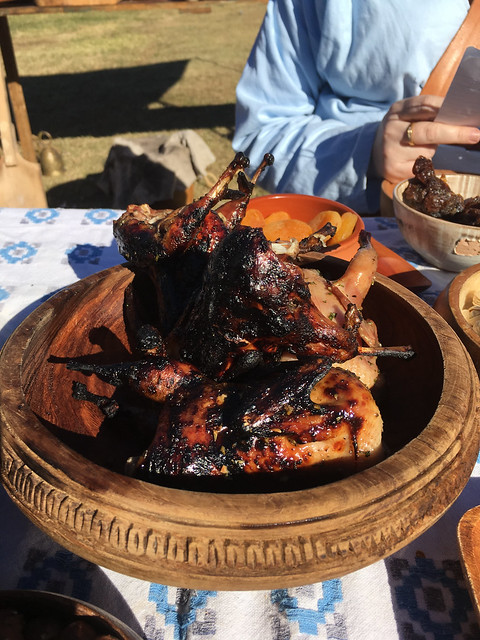 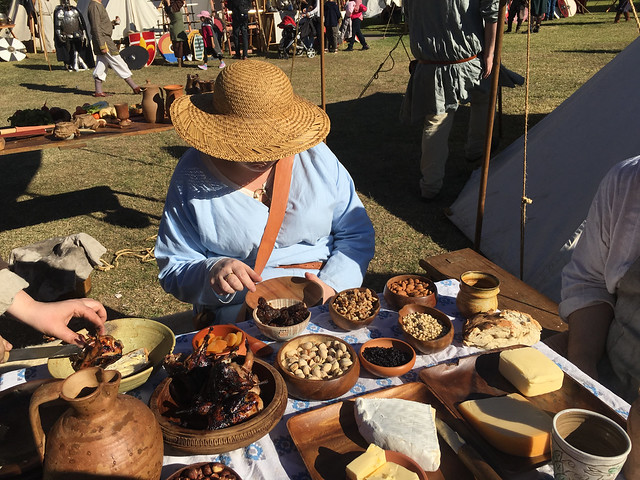 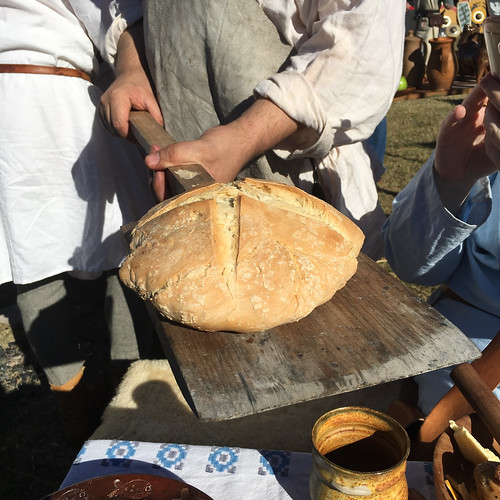 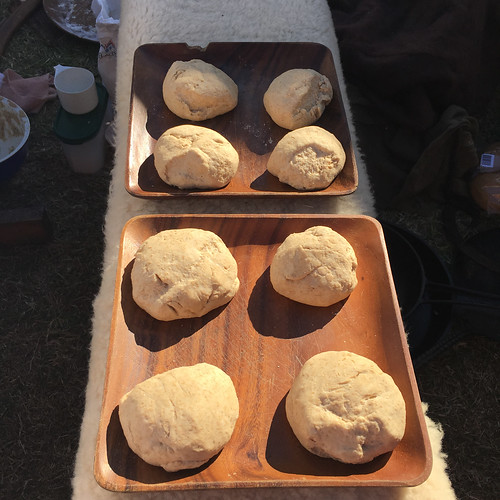 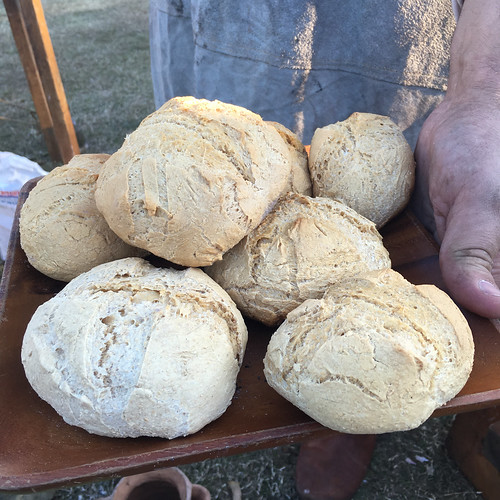 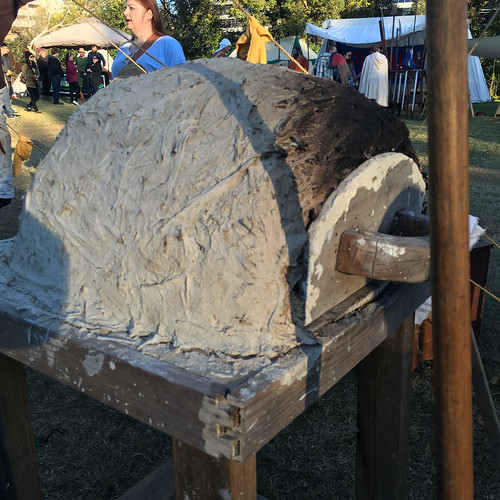